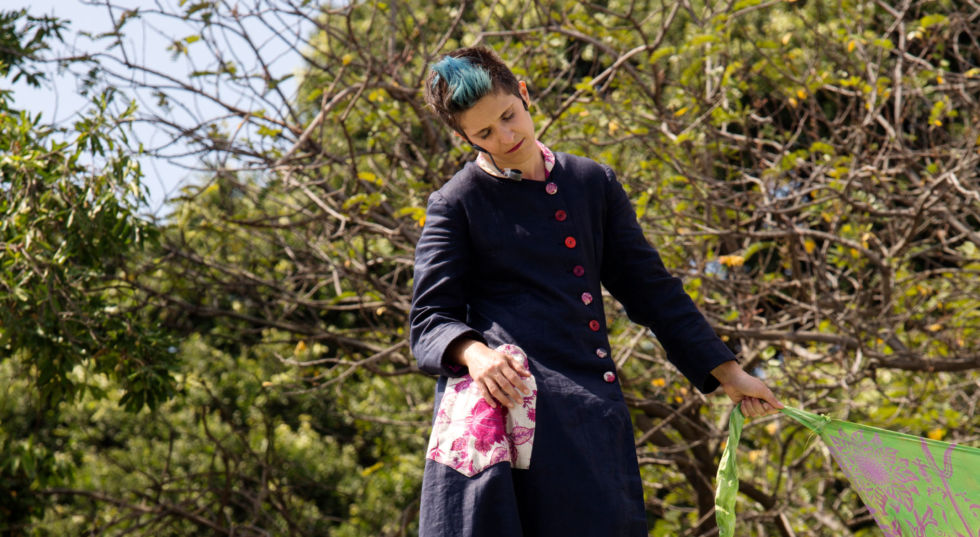 It goes without saying that being disabled in this society can be hard. However, my status as a blind performer has also afforded me some amazing experiences that are unique to the disability arts community. Four years ago, I was lucky enough to be one of the professional artists to perform on a sway pole in the Paralympic Opening Ceremony. This past month, I was given the opportunity to take that skill to Rio as a performer in Graeae and Strange Fruit’s beautiful outdoor show, The Garden. Needless to say, when I was asked about my availability, I said yes and decided that if any conflicts arose, I would just work them around this opportunity.

The Garden is a well-established show for Graeae that has been performed multiple times. Coming into this as a newbie, I knew it would be extremely challenging for a number of reasons. First and foremost, sway pole performing is physically challenging, requiring a very specific type of fitness and I had not been on one in four years. Last time I did it, we had two months intensive aerial training followed by two months sway pole training to condition our bodies for the task. This time, we had four days. Luckily, I am still a fit and practicing aerialist, so the transition was not too bad. However, there were varying levels of soreness throughout my body that were aided by Tiger Balm… seriously; they should have sponsored me to be there. Second, on top of the aerial movement, this piece incorporated multiple languages: British Sign Language (BSL), Brazilian Sign Language (Libras), spoken (and sung) English and Portuguese, and audio description (AD). Originally, I was tasked with delivering the Portuguese AD in the latter part of the show and spent a good few weeks practicing my lines (I don’t speak Portuguese, by the way). If anyone is interested, I can still say helpful Portuguese phrases such as “The man shakes his head and glares at the boy,” or “The boy, happy as a fish, smiles at the hungry woman…” While these may not be helpful in everyday life, they make sense if you know the story… Due to last minute changes in the script, my lines were given to a Brazilian Portuguese speaker (thankfully). However, I still sang in Portuguese and was told by many that I sounded like a local, something of which I am extremely proud.

Alongside all of this, before heading to Rio, I had friends and family sending me worried messages about safety. What about the Zika Virus? What if I get mugged or worse? What about the fact that Rio is not necessarily known as the most accessible city in the world? What about the political upheaval and anger with their current president or the controversy around money and the Paralympics? Etc. Etc. Of course, the minute we arrived, we were welcomed seemingly by the entire city with open arms. Is Rio a safe city? Maybe not. Is it fully accessible? No, but neither is London. Is Rio beautiful and friendly? Absolutely. The Brazilian people we met were openly curious and excited to meet us… even when they found out we weren’t Paralympians (I was asked multiple times by locals what sport I play). Also, the Brazilian team we had working on the show with us was AMAZING. I have never met a group of people more excited, keen and on the ball when it came to putting a show together in a short and very intense amount of time. We did a mammoth thing in four days that was to take a cast of people, half of whom had never done the show and half of whom hadn’t done it in four years, and put on what became in many ways a completely new piece of theatre. It was so exciting, and the joy and love we received from the people who came to watch was overwhelmingly wonderful and fulfilling. To get to do this during the Paralympics in Rio made it all the more special.

The Garden and so much of the work Graeae has done in the UK and internationally has solidified this company as a true ambassador of disability equality and access. On a personal level, Graeae has given me some of the most amazing and fulfilling jobs in my career, and has taught me so much about my skill and potential as an artist and a person. On a more general level, they have given me the capacity to also be an ambassador and to connect internationally with people who are fighting the same fights or who are just learning about the wonder and strength that is the disability community. In this time of austerity and Brexit, it is so wonderful to have experiences that reinforce the fact that coming from different countries, cultures or languages does not have to be a barrier. In fact, this diversity, this difference and the strong desire to work together because of (not despite) these differences is an extremely strong asset. It can make beautiful things and bring huge amounts of joy.