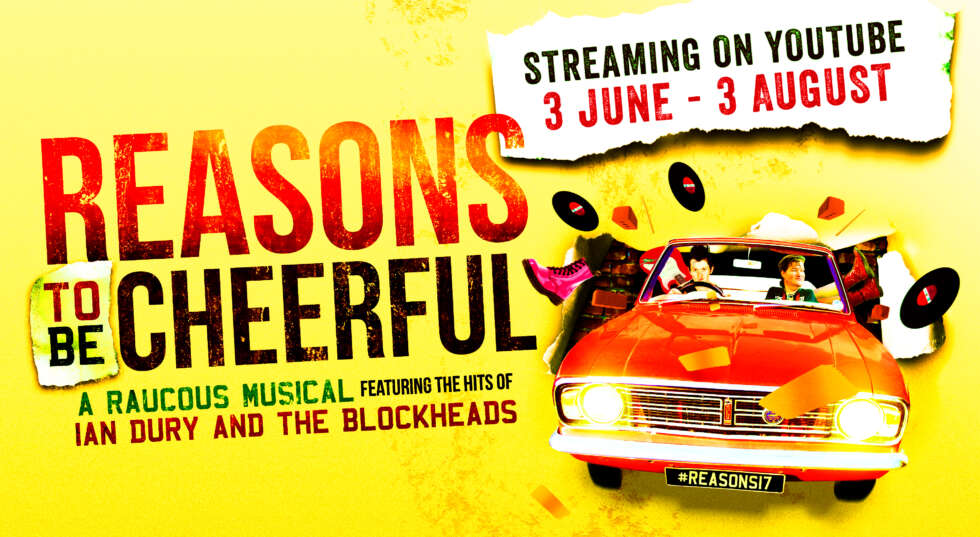 Knock me down with a feather…

Graeae are thrilled to announce their critically acclaimed box office hit musical Reasons To Be Cheerful is available FREE, via online streaming on YouTube from 3rd June through to 3rdAugust.

Following nationwide tours, concert versions across the world and a performance at the London 2012 Paralympic Games Opening Ceremony, Reasons To Be Cheerful is back; this time online, delivered directly to you in the comfort of your own home.

As part of Graeae’s lockdown digital programme, the acclaimed 2017 staging of Reasons To Be Cheerful by Paul Sirett, with music by Ian Dury and The Blockheads, can now be enjoyed by everyone. The musical was filmed in front of a live audience at Theatre Royal Stratford in the autumn of 2017 as part of its national tour produced in association with The Belgrade Theatre Coventry.

Jenny Sealey, Artistic Director and CEO of Graeae says: ‘I am so very happy that we’re able to make the 2017 production of our beloved – and most well-known show – Reasons To Be Cheerful available to watch online. We’ve now staged the full show in the UK three times, toured the concert version round the world and had the cast perform the hit song Spasticus Autisticus in front of the Queen at the London 2012 Paralympic Opening Ceremony. But this is the first time it’s ever been available online in full. These are strange and unsettling times we’re living in, and we’ve never needed a Reason To Be Cheerful more. Huge thanks to the cast, creative team and of course the fabulous Blockheads for allowing us to do this.’

Jemima Dury, Graeae Patron and daughter of Ian Dury says: ‘Graeae’s Reasons To Be Cheerful has been part of my life for ten years now. I am overjoyed that it’s now available online … because when it’s not in production – I miss it!

This is an exceptional cast of performers in a truly diverse and accessible show and is everything I love about fresh, forward thinking, inclusive theatre. I have no doubt that the show is going to virtually explode with energy from screens all over the world just like it brought the houses down with rapturous applause and standing ovations on every tour date since the Autumn of 2010. This is a wonderful tonic for tough times. I’m very excited. Enjoy!’

Part gig, part play, Reasons To Be Cheerful tells a coming of age tale that rejoices in the infectious and enduring music of Ian Dury and the Blockheads. Featuring stone-cold classic songs including Hit Me With Your Rhythm Stick; Plaistow Patricia; Sex and Drugs and Rock and Roll; Sweet Gene Vincent; What A Waste and the titular Reasons to be Cheerful (Part 3), Graeae Artistic Director, Jenny Sealey’s production is loud, bold and jubilant.

The show includes the new song ‘If It Can’t Be Right Then It Must Be Wrong’, a rousing protest song, highlighting the brutal cuts to the welfare system in recent years, which was written exclusively for the 2017 tour by members of Ian Dury’s band The Blockheads, Chaz Jankel and Derek Hussey and Graeae’s John Kelly.

For more information on Reasons to Be Cheerful click here