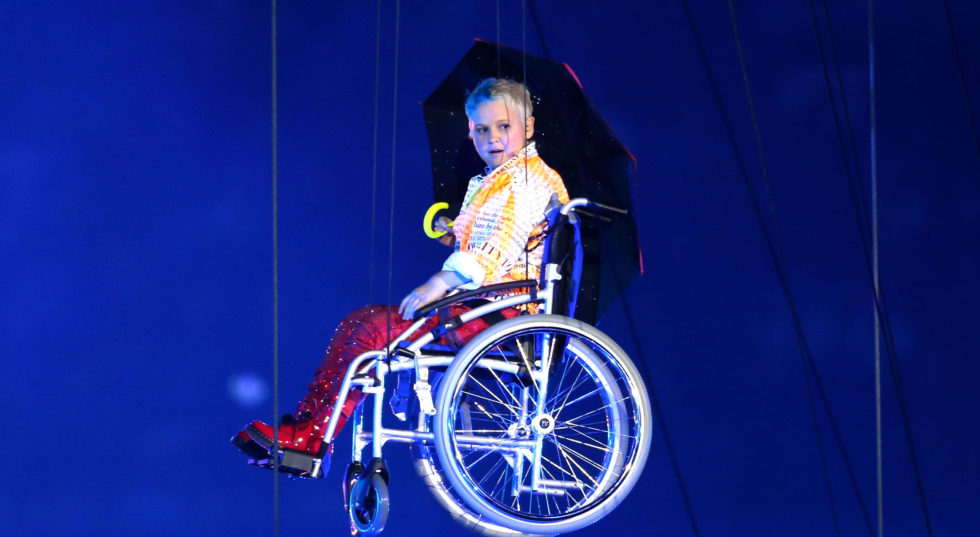 On 29 August 2012, the world watched as D/deaf and disabled people literally took centre stage in the spectacular, game-changing Opening Ceremony for the London 2012 Paralympic Games, directed by Jenny Sealey and Bradley Hemmings. Watching the cast of ‘Reasons to be Cheerful’ performing ‘Spasticus Autisticus’ to a worldwide audience of two billion people (including HM The Queen) was an incredible statement to witness.

“When I shot out of the stadium at the end, as I broke the glass ceiling, as I went up, I just heard the massive cheer from the entire stadium, and that’s when I thought: Yes! We’ve done it! We have done something great here. Just talking to people after and going to see some of the Paralympic events, it had really put us on the map, in disability arts, as London and as the UK.”
Nicola Miles-Wildin, Miranda, London 2012 Paralympic Opening Ceremony

To mark the fourth anniversary of the Games, and the year of the Rio Paralympic Games, artists involved in the London 2012 Paralympic Games Opening Ceremony Mat Fraser, Nicola Miles-Wildin, John Kelly and Jenny Sealey joined Rufus Norris, Director of the National Theatre on Wednesday 3 August at the National Theatre, to discuss the legacy for D/deaf and disabled people over the last four years, as well as what role the artistic community can play to ensure the fight continues.

“A few weeks after the Paralympics finished, the curtains closed and the rug was pulled. We closed the ILF, made devastating changes to the access to work programme and the basic things that we all needed to make that night happen have been decimated. We have been on panels; we have fought in committee meetings all our lives. For that unique moment during the Paralympic Opening Ceremony, everyone was smiling at each other. We immersed ourselves in a beautiful world where everyone was happy and we could celebrate. Disability art was seen for the quality that it can really, really be. And I want that back.”
John Kelly, musician and actor

For further information about this event, or for any interview requests, please email richard@graeae.org