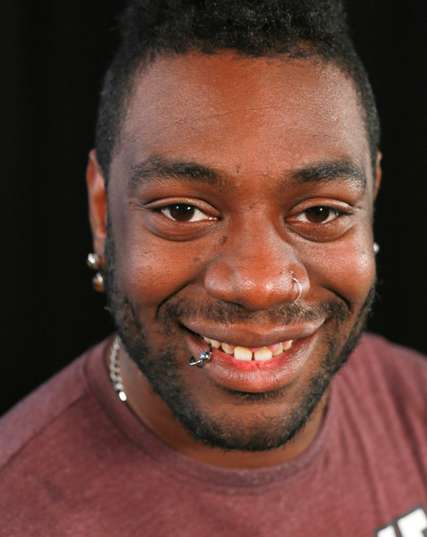 I’m just going to get straight into this as I’m sure I’m not the only person who feels somewhat different being involved in the arts and being a new parent.

I’m still coming to terms with the fact that people see me as a Dad, in a good way of course. I just see me looking after my daughter, that guy who feeds and changes her when she needs it.

Firstly I’d love to say I’ve managed to balance everything perfectly and by myself, but without the team work and patience of my partner, there would be no way I could undertake such a duty of being a playwright and a musician, as well as a committed Dad. So big thanks to her first of all, I still can’t really get my head round the fact a little person relies on me.

Yet at present it seems to be so organic and natural. My daughter Iris is only three months old, but already seems to have her mother’s strong will of knowing what she wants. So the few things I can say to Iris are thank you.

Before I was a Dad, I’d not really have a structure of things work-wise. I’d work sporadically and things would get done either when deadlines were set, or in some cases, some lovely people who commissioned me wouldn’t give me a deadline, which was dangerous for both parties. Now, however, with feeding and changing as well as unexpected scrapes babies get into, I’m organised – briefs and commissions get done as soon as she’s having a feed, nap or been put to bed. I realise now there has to be a structure or things just don’t get done.

Without my daughter, I’d probably not be so focused, so she deserves a massive thanks too, for whipping her Dad into shape, however I’d have probably learnt this without the sleepless nights and nocturnal behaviour slash feeding.

Here we are though, both on an incredible journey – me as her Dad and her exploring the world. We’re both not always going to get it right, but we’ll definitely learn from what we do and go forward.

This is me signing off as a newish Dad (just like she knew, now it’s time for me to change that nappy).

So two months into the next year of Write to Play and I feel it’s gone so quickly, it’s been amazing so far in the way we’ve had the weeks masterclass, then I felt I could not wait to get going again I was submerged by ideas, yet nothing on paper.

This is when the panic set in luckily for me, I’ve had two great workshops and a mentor who gets what I’m about as a writer which for me is so important. I definitely feel very well supported and eager to just get on with it now.

The first session we did of the new year was at the Octagon in Bolton. I’ve always been a fan of this theatre so it was great to be getting to do a session there as it made me feel more of a playwright, I’d checked out the play ‘Random’ before meeting Debbie Tucker Green and dug a few other pieces she’d done so was looking forward to what she had to say.

The main thing I took away from the session is that we are all story tellers with something to say and I really enjoyed thinking of myself like that as I feel story telling is such a massive thing, even from the caveman to nowadays. We’ve all got an interpretation of a story and I feel this is what makes stories take on a life of their own.

So I left that session very positive ready for the next one at the Manchester Royal Exchange with Bryony Lavery.

This was great, first of all we had a chat and did some writing exercises then we wrote a little monologue from the ideas we came up with in the session. We then had to act each other’s short pieces, which for me was scary at first as I see myself as someone who writes, but avoids acting.

This exercise was incredibly useful, in getting to see how the words on the page translate to the stage and I felt it was a really worthwhile thing to do as it has helped my first draft leaps and bounds.

These few months have shown me it’s a great time to be a playwright and it’s now time to create something, especially with the new skills we’ve all learnt.

Last month was the start of my journey as one of five writers on Write to Play, Graeae Theatre Company’s new writing programme. It was a week of idea sharing, writing exercises, and just getting to know the other writers (Jackie, Helen, Tea-Bag and Karen), the latter being the highlight for me.

Getting to know the tutors, Graeae and fellow writers was the main highlight for me, as I now feel more connected as a writer to like-minded people. The support from peers is very important to me and during Playwriting 101 I felt that wholeheartedly – it was a running theme.

December was a big month personally and professionally. I’ve been so excited about being a part of Graeae and starting Playwrighting 101 has made it all the more real. We had some great workshop leaders, Mike (Kenny) and Kaite (O’Reilly) who have taught me so much. The advice they’ve given me has pushed my work on years ahead of what it was. The more and more I think about this, the more fortunate I realise I am. I don’t usually gush, but I guess it’s a gushy moment.

What I liked most writing-wise about the week was how every day we did something different and challenging, yet it was in a relaxed environment so I felt it really got the best out of me. It was also made better by our resident Santa (Suzanne Bell) dropping in Christmas treats while we were getting on with our various tasks.

Another highlight was meeting those involved in Graeae, in the shape of Jenny (Sealey) and Amit (Sharma), which helped me gain more of an understanding and respect for what it is to be part of the Graeae family.

Praise also needs to go to Chloe who was with us all week, as well as Simon the Access Worker who helped us out during the week. Finally, as I’m definitely waffling now, it was great to meet all the partners from the Octagon Bolton, Liverpool Everyman and Royal Exchange.

It feels great to be a part of something that is definitely flourishing and I’m very excited to undertake new work under the banner of Graeae theatre.