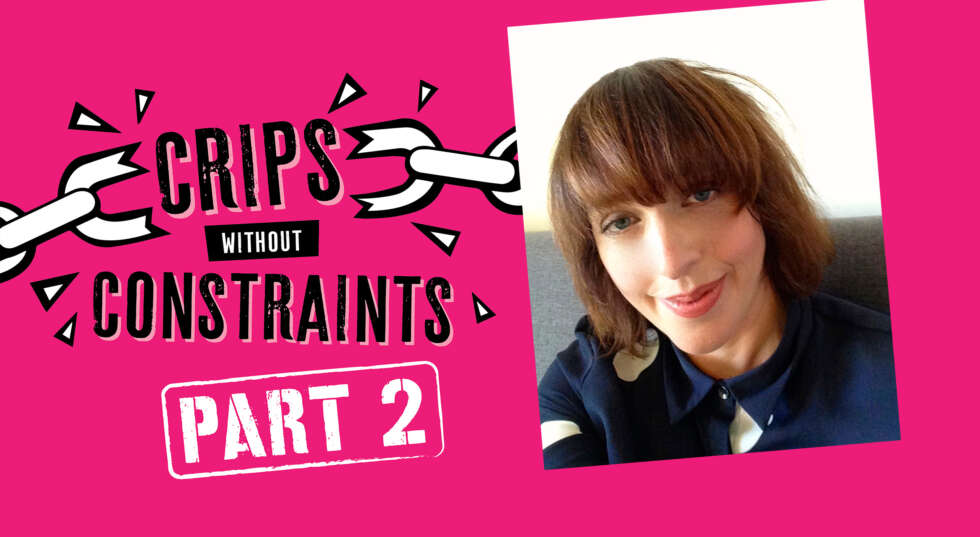 Every week for the next five weeks, we’ll be getting to know the writers from Crips without Constraints part 2 better, with a five quick-fire question and answer session.

This week, it’s Karen Featherstone, writer of Good Day Bad Day. Karen is a stage, screen  and fiction writer. She’s spent time in the story offices of Coronation Street and Emmerdale and she has an MA in Screenwriting from the University of the Arts.  Her play The End of Sleep, a futuristic depiction of a society forced to stay awake, was a finalist in 2015 for the BBC’s Alfred Bradley Bursary Award for radio drama. An alumna of Graeae’s year-long Write To Play initiative, her work has featured on Channel 4, and at theatres around the UK, including the National Theatre Studio, Hampstead Theatre, Liverpool Everyman, for Oldham Coliseum, and as part of a Little Pieces of Gold showcase at Southwark Playhouse.

What is your favourite occupation?
My favourite job was a cinema usher. I’ve done that at 3 cinemas. I got to see all of the films, or I could choose to sit at the back with my torch reading or writing.

What is your greatest regret?
That I didn’t learn to drive earlier in life, so I missed out on a dream job offered to me at Pinewood Studios. It still hurts!

On what occasions do you lie?
When I’m too busy with writing, I’ve found non-writers are sometimes surprised it can take as long as it does, so I’ll say I’m busy doing something else like (insert practical activity), which I hope is more credible as I don’t want the person to disbelieve that I’m writing for so long, and have their feelings hurt.

Whose are your heroes in real life?
Anyone who has a greater (non-harmful) purpose beyond the interests of their own self-advancement.

How would you like to die?
I will be taking part in such a common human experience (besides birth) that, as a writer, if I’m conscious at all, I expect I will find it interesting in some way. Even if at the time I’d rather it wasn’t happening. So I’m not one of those who want to go quickly in their sleep. I like to know what’s going on!