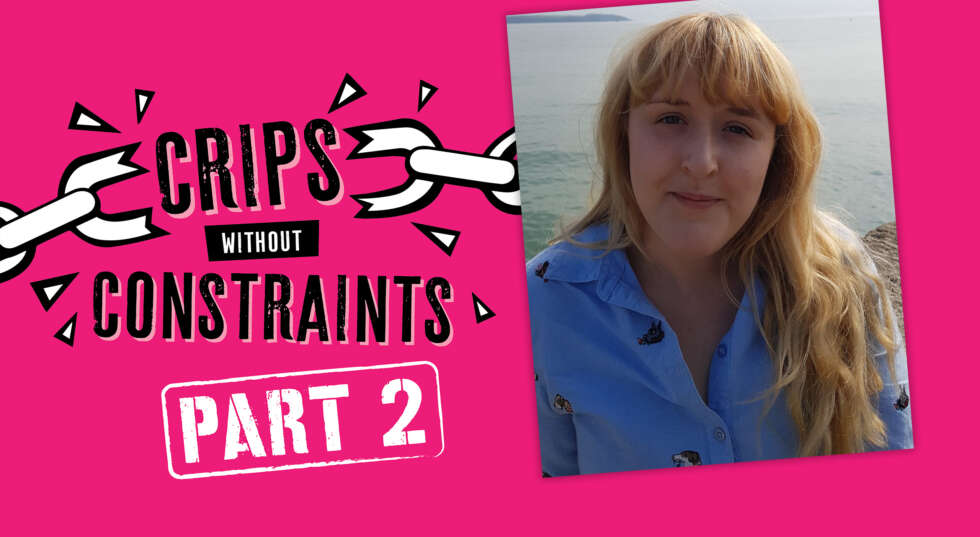 Every week for the next five weeks, we’ll be getting to know the writers from Crips without Constraints part 2 better, with a five quick-fire question and answer session.

This week, it’s Jessica Lovett, writer of Stuck With You. Jessica is a writer from Shropshire, now based in Bristol.  A Graeae Write to Play graduate, she has also been selected for writing programmes with theatre companies including including Pentabus, Royal Court, Deafinitely, and Soho, as well as a development programme with the BBC. Her play Like I Care (Longlisted, Bruntwood 2019) has gone through rehearsed readings and extract sharings, as has her play She said He said that was produced by Pint Sized and performed at the Bunker Theatre. She has developed this play further during her time on Soho theatre’s Writers Lab 2019. She has had work performed at Ludlow Fringe, Latitude Festival, Arena theatre, The Y theatre, and The Bunker. She is currently part of the Royal Court and Deafinitely theatre’s invite group.

Her play Stuck With You for Crips without Constraints part 2, starring Sharon Duncan-Brewster, can now be watched here.

Where would you like to live?
I would love to live in Cornwall. Preferably in a farm house with a sea view.

Which living person do you most admire?
It’s really hard to pick one person. But growing up I watched a lot of Victoria Wood shows with my mom and I’ve always loved her work and the characters she explored. If I was going to pick someone closer to home it would be my sisters.

What is your motto?
Tough titties.

Which talent would you most like to have?
When I was younger I always wanted to be a painter/artist, but I am terrible at drawing. You wouldn’t have known as my mom always used to hang up all my pictures despite the fact you could barely tell what they were.

What is your favourite journey?
Visiting family. As soon as I reach the Shropshire hills I know I’m not far from home.